Wow, the week really flew by! I couldn’t believe it was already time for another shoot. For this week’s shoot, I wanted to work on a basic portrait, and play with the Inverse Square Law (for an in-depth explanation with examples, head on over to Zack Arias’ blog where he explains it all with examples.) and see the different lighting effects I could get with a fully open umbrella and then a “poor man’s softbox”, where the umbrella is closed down half way.

My good friend Carmen agreed to be my model for this shoot. I was actually surprised when she agreed so readily, as she is not a big fan of being in front of the camera. I can identify with that, I always feel a little awkward when I’m in front of the lens instead of behind. Carmen had just returned from a visit to Chile almost 2 weeks ago. She left sunshine and warm weather and came back to a ridiculous amount of snow and cold. We both thought it would be a good idea to shoot indoors. Carmen offered her place, which worked out really well. Her condo had ceilings high enough that I could easily raise my umbrella to comfortable height (about 10′) and we had space to move around.

When I arrived, Carmen was in the middle of baking cookies – for me! I’m eating one as I blog this. T-A-S-T-Y! I really do enjoy having friends who bake and a boyfriend who cooks, as I’m not very handy in the kitchen.

Carmen said she felt a little awkward just standing in front of the camera, but I couldn’t tell when I was going over the photos. Lesson learned: When you have the opportunity, play music and goof around more. Now I just need to find a speaker set that I can plug into my iPhone so I can be my own DJ.

We first started out with an open umbrella and Carmen stood in front of a window with the curtains drawn. The sun was already well on it’s way below the horizon and the print was fun, so it was a good starting place. For this series of images, I had the umbrella fully open so it would light both Carmen and the background. I had Carmen stand about 7′ away from the background and just about 3 or 4′ from the light. Flash power was at 1/4, ISO 200, shutter speed 1/60 and f 5.6. The umbrella was directly in front of Carmen, and I was shooting immediately below it. 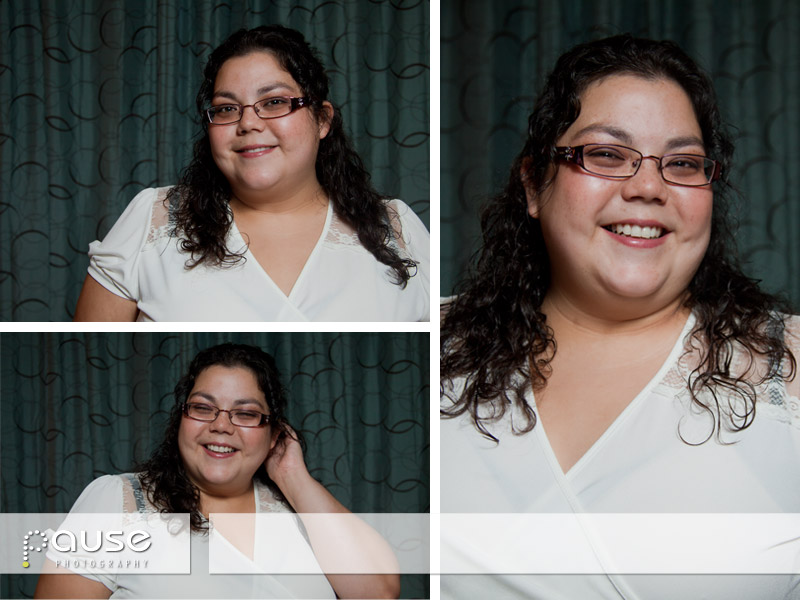 Next, I wanted to move to a neutral background. Conveniently, she had a wall that was completely bare of anything with the exception of a light switch. I shot most of these images vertically instead of horizontally because I didn’t want the light switch in the frame, or a flower arrangement poking into the other side of the frame. Again, I started off with an open umbrella. Distances were relatively the same as above and all camera and flash settings also stayed the same. 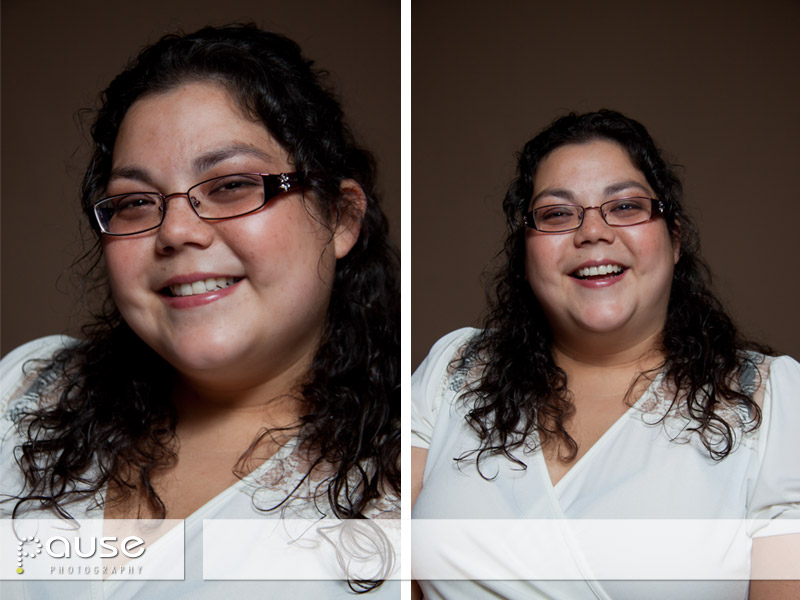 I then closed down the umbrella half way (a “poor man’s softbox”) and moved it in a bit of a semi-circle to be off to the side. I also moved it about 1/2 a foot closer to Carmen. By closing down the umbrella, I was able to achieve more directional lighting, a slightly more dramatic look, and took advantage of the Inverse Square Law, which basically states that light falls of the fastest close to the light source and more gradually the farther away the subject is from the light source. Since I wanted to start making the background darker, I moved the light to be closer to Carmen and used a more directional light source. Because I moved the light closer to Carmen, I had to stop down my aperture to f 6.3. Not a “real” f-stop, but all I needed was about 1/4 stop less light. 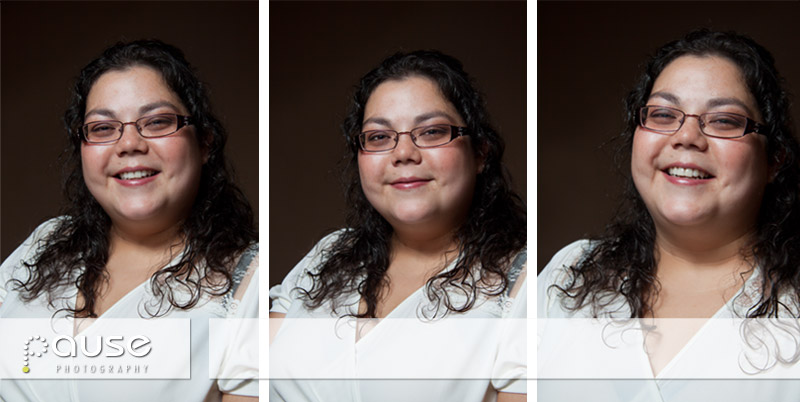 I wanted to see if I could make the background even a little darker, so I had Carmen take a step or so closer. The beige background is now almost black. We also wanted to see if the fact that Carmen wore glasses had any effect on the amount of light that was getting to her eyes. Carmen took off her glasses for a few of the pictures. I was happy to see that the glasses didn’t cut down the light, and I was also happy I didn’t have too much glare to contend with from the light reflecting in her glasses. 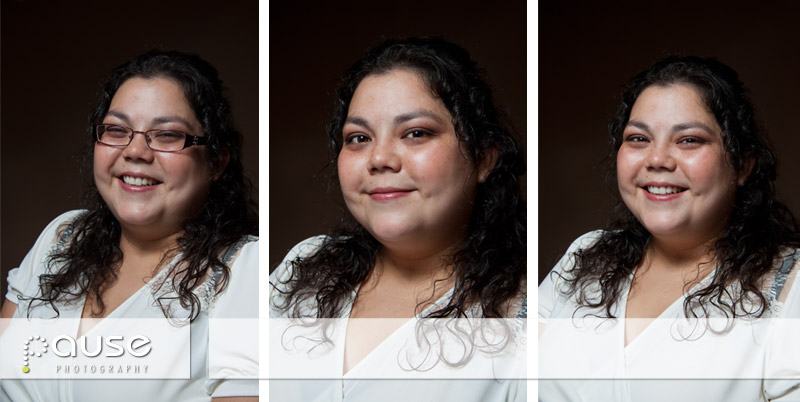 Here, you can see the difference between a fully opened umbrella (left) and an umbrella this is partially closed down (right). 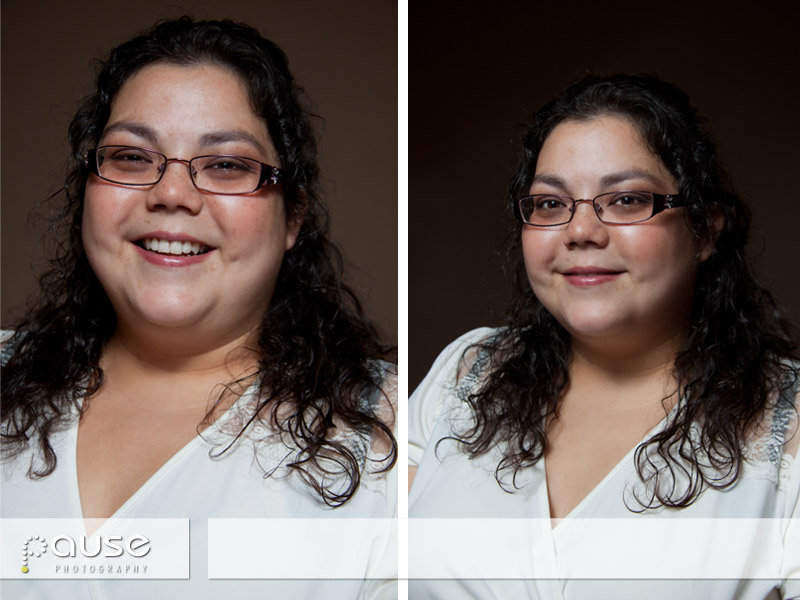 Here you can see the set up. first is the umbrella fully open, next is the umbrella partially closed down. The OneLight workshop really taught me that you just need a minimal amount of equipment to have a portable studio. As Zack Arias said in the workshop, “What is a studio? It’s 4 walls, a ceiling and a floor”. Have light, will shoot! 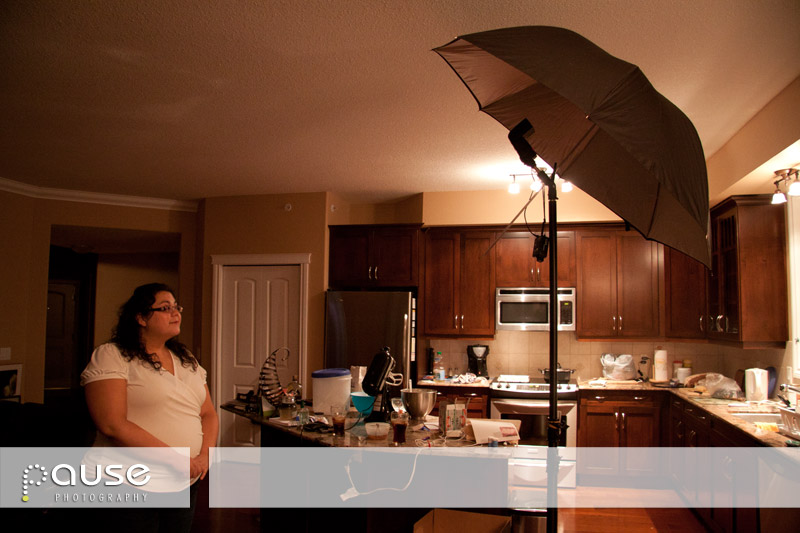 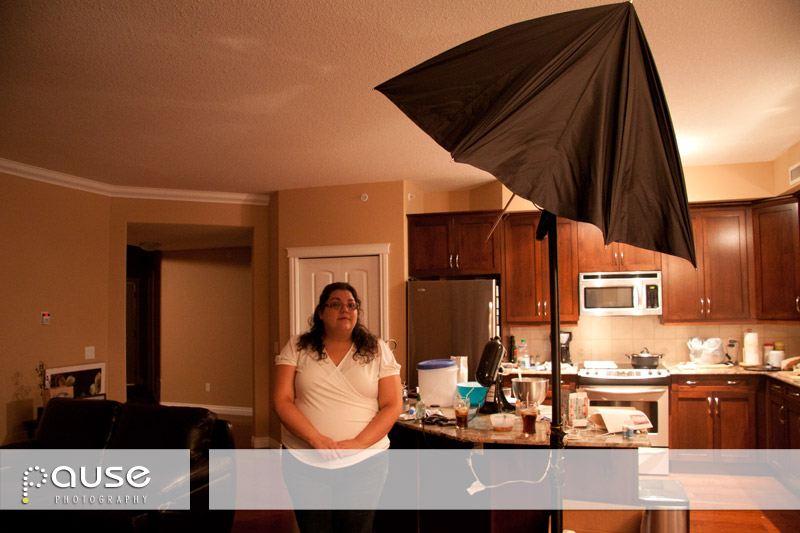 Thank you, Carmen! For being a fantastic model and for the tasty cookies! I really enjoyed seeing you after you’ve been gone for so long on holiday. You are a kind and caring person and I really do appreciate you stepping out of your comfort zone and being willing to help me out on this project.

This site uses Akismet to reduce spam. Learn how your comment data is processed.